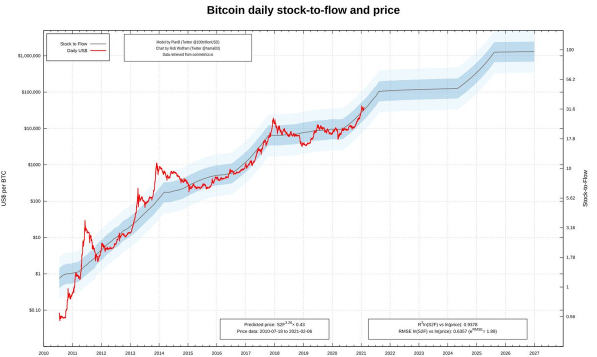 There is a lot of attention on a particular method used to predict the price of Bitcoin, one that is assumed to have constantly managed to show the path of BTC over the years. Today we talk about stock to flow, a method used to measure the abundance of a particular resource.

Now that during that week we’ve switched from low volatility to more active markets, understanding the basic principles behind S2F would be extremely important for those looking at Bitcoin as a long-term investment.

What is Stock to Flow?

An asset holding a high S2F should preserve a higher valuation in the longer run, as long as there is demand for it. On the opposite side of the spectrum, we have consumable goods and industrial commodities, those of which generally have a low S2F ratio.

Stock to Flow and Bitcoin

Based on this, if we apply S2F to Bitcoin, the approximate value at the time of writing is in the low 50s, after increasing from 25, where it was before the May 2020 halving. Basically, Bitcoin is now a scarce resource, relatively costly to produce and the new supply had been cut in half.

Looking at the chart above, we can easily notice that the price of Bitcoin had been steadily tracking the rise of the Stock to Flow ratio and each time a halving occurred, the spike in price and the S2F is pretty obvious.

Limitations of Stock to Flow in Bitcoin’s case

However, those that already got overly-optimistic about Bitcoin’s prospects based on S2F, need to also understand that this is a model used to measure the scarcity of any given resources. But, it does not factor in other variables that might impact the price.

In the longer run, critics believe that the S2F model will fail in case the supply scarcity will be the only Bitcoin quality. As a result, the most important thing would be to have broader Bitcoin adoption and usage across the world, to see its valuation increasing over the next several 4-years cycles. Are you already using Stock to Flow to make long-term Bitcoin investments and if yes, does the method had been useful in your case? Share your comments below!