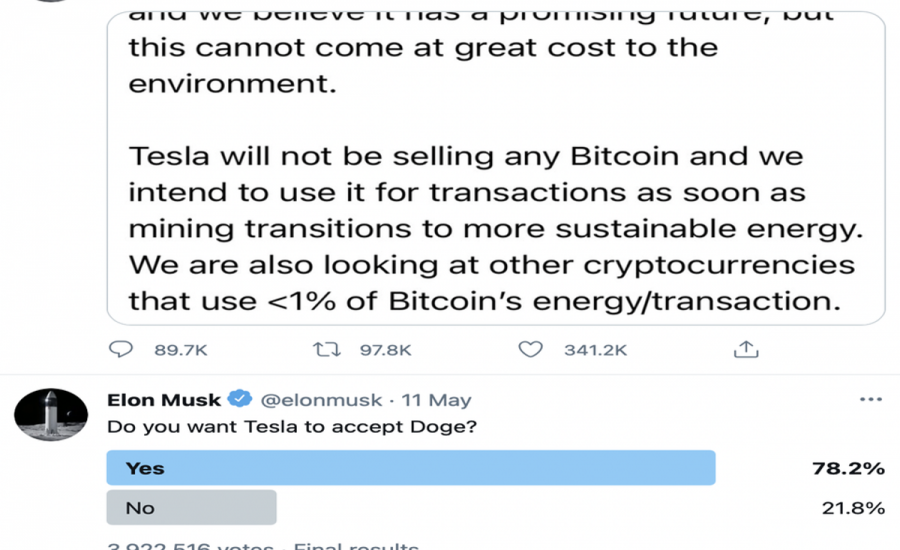 Elon Musk’s response to a Cointelegraph report has led to Bitcoin’s trading price jumping higher than its recent position. Tesla’s chief executive officer retorted via a tweet on Sunday, June 13.

We want to share this latest report with our readers. It clearly shows that Mr. Musk is truly a cryptocurrency influencer.

Additionally, we want to inform our readers that his Twitter messages are a must-follow for all Bitcoin and digital currency investors and enthusiasts. Based on the news posted online by Singapore-based daily newspaper The Straits Times, Bitcoin’s trading price jumped above US$39,000 following Musk’s mentioning of Tesla resuming transactions with the digital asset.

Musk confirmed that his electric car company would permit Bitcoin transactions again when they get the confirmation of a reasonable, or -50 percent clean energy utilization by virtual currency miners, with a positive future trend. His Twitter message was a response to Cointelegraph’s news that cited Magda Wierzycka.

The latter is the executive chair of South African asset manager Sygnia. Wierzycka had remarked that Musk’s recent tweets about Bitcoin should have prompted a US Securities and Exchange Commission probe.

This trading price is the highest level since June 3. It is also merely below the US$40,000 round-number level viewed as significant by some cryptocurrency chart watchers. In recent months, Musk has whipsawed virtual tokens, including Bitcoin.

Last February, Tesla confirmed that it had acquired US$1.5 billion in Bitcoin. Additionally, Musk’s car firm had signaled its intention of accepting the world-famous digital asset as payment for its vehicles.

Then, in May, the Tesla boss said that his firm had suspended car purchases using Bitcoin because of issues relating to fossil-fuel usage for transactions and mining.

There are plenty of key issues that can affect Bitcoin’s trading price. Among them are diversification, institutional adoption, regulatory concerns, and sustainability.

These issues relating to Bitcoin are both positive and negative. Nevertheless, besides these concerns, we want to advise our readers always to monitor Mr. Musk’s tweets.

We have observed that the recent events in Tesla have demonstrated Mr. Musk’s Twitter statements being controversial and impactful. The Tesla CEO’s tweets and his company’s moves have had noticeable impacts on cryptocurrencies, including Bitcoin’s trading price.

Furthermore, we noticed that Mr. Musk’s Twitter post could often alter momentum and dominate the Bitcoin and cryptocurrency narrative for days or weeks.  Therefore, we recommend our readers always pay attention to his tweets because we believe that his postings on the famous social media platform can significantly affect Bitcoin and digital currency investors positively or negatively.